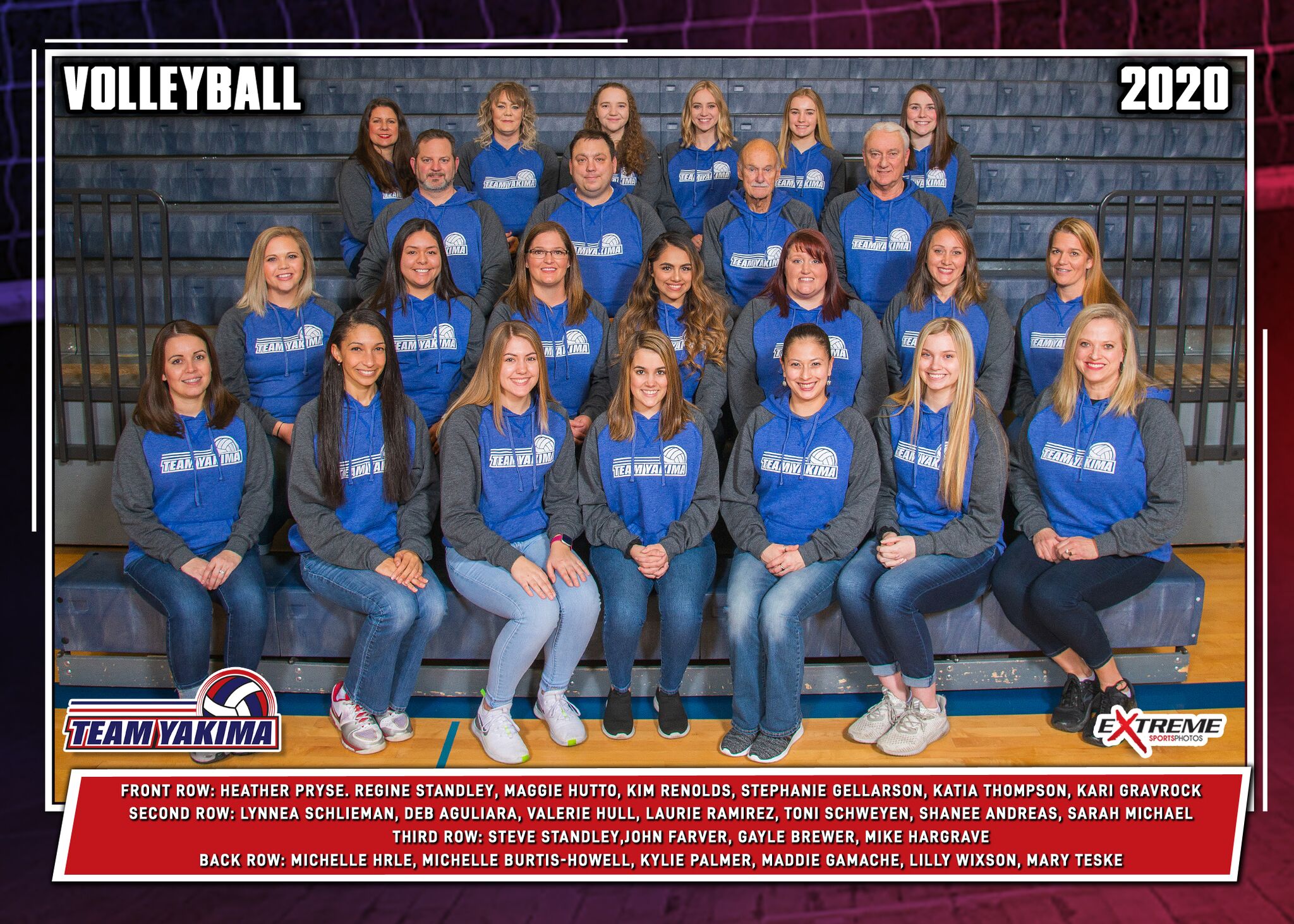 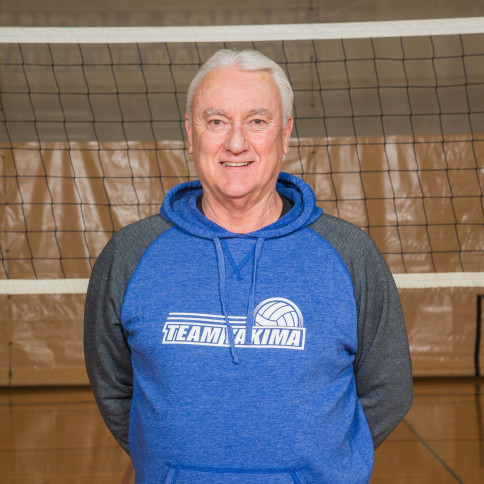 We are so lucky to have Mike Hargrave coaching with Team Yakima again. Mike is the head coach for the U18 Gold Elite Team. Mike Hargrave began his volleyball career at Washington State University in 1971. He joined the YMCA men's team in 1974 and played with them to win the Regional Championship. Mike played AA men's ball with the Floaters. His coaching career started with Gail Brewer and Al Rodgers in 1978. He coached with Dr. Brewer for twelve years. They lead teams to multiple Regional Championships, Festival, Can-American and National Championship Tournaments. Mike also coached with Cascade for two seasons competing in the U16 & under regional finals. Mike has also developed high school volleyball programs. He took the Riverside Christian School Head Coaching Position in 2003 and took the team to 8 State Tournaments, winning the 2003 championship. Mike loves the game and continues to help and has coached several teams since 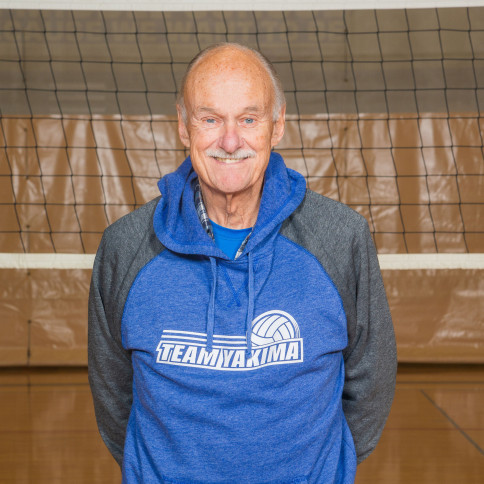 It is an honor to have one of the founders of Team Yakima Volleyball Club, Gayle Brewer, coaching the U18 Gold Elite Team with longtime friend & colleague Mike Hargrave. Gayle's knowledge of playing & coaching the game of volleyball is immense. In 1979, Gayle lead Team Yakima's Gold Team to attend the first-ever USA Volleyball Junior National Championship. In 82, his team finished 2nd in the National AAU Junior Olympics in Chicago. Gayle's 1986 team, were in St. Paul for the USA Junior Olympics Championships where U17 Gold earned the championship of the Silver Division. Championships were followed by U-14 Gold in 2002 and again in 2005. Gayle has set a precedent of bringing athletes together, teaching the game & creating champions. Thanks to Gayle's efforts Team Yakima has actively participated in nearly all of the Annual Volleyball Festival Tournaments all over the country since the beginning of conception. Shanee is a long-time volleyball aficionado. She started her volleyball career in 7th grade with Team Yakima and also played club ball for Cascade. In high school, Shanee played varsity volleyball for West Valley HS, where she was voted All League. She went on to play at Yakima Valley College and continues to play indoor and beach volleyball today. Shanee began coaching with Team Yakima in 1993. She also coached five years at Riverside Christian School. This season, she is the U16 Gold Elite head coach and has served as a Team Yakima Board Member for over a decade. Currently, she lives in Selah with her husband of 15 years and all of their three children are playing club volleyball. 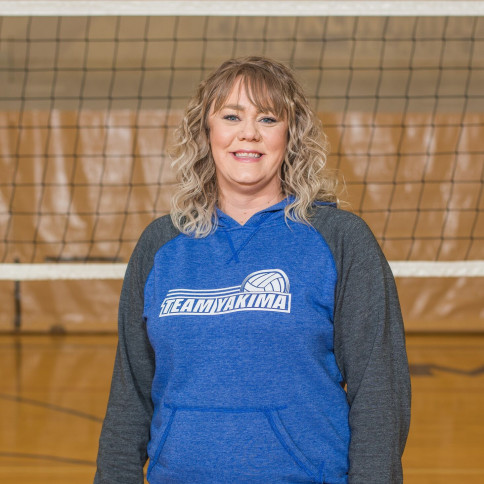 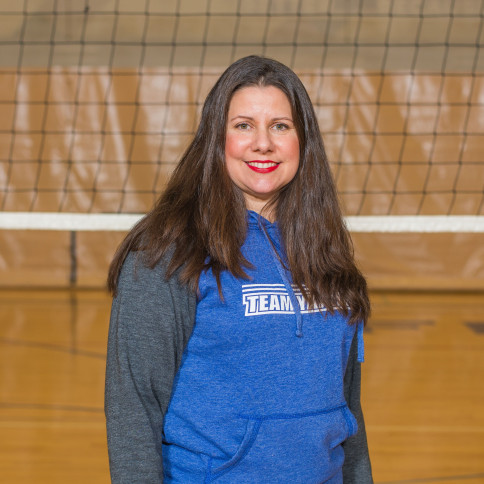 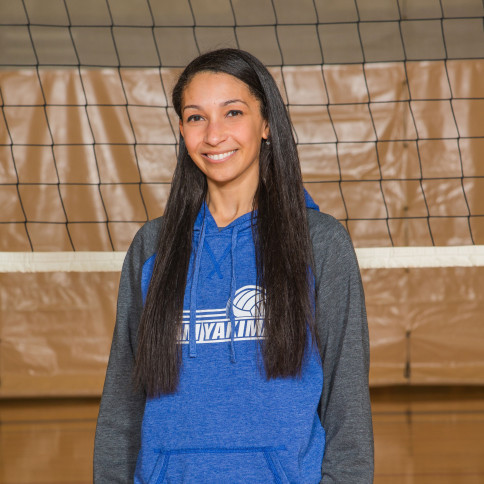 A third-year coach for Team Yakima, Reggie was the U14 Red head coach last year and the U14 Gold assistant the year before. She started her volleyball career in 7th grade and continued playing at La Salle High School here in Yakima. Earning four years on Varsity placing 6th in 2009, 7th in 2010 and 6th in 2011 at State. She also had three years of Varsity Basketball placing 2nd in 2010 and 3rd in 2011 at state. She earned four years of Varsity Track going to state all four years placing in many events including part of the 4x200 state championship relay team in 2010. Reggie played club for Cascade, Spikers and Central Washington Elite, which went to play at the junior Nationals in Atlanta, Georgia in 2011. Reggie went on to play volleyball at Lewis-Clark State College in Lewiston Idaho for four years as a Middle Blocker/Right Side, while coaching various ages for their Warrior Club. She graduated in May 2017 with a Major in Business Communications and minors in Spanish and Creative Writing. 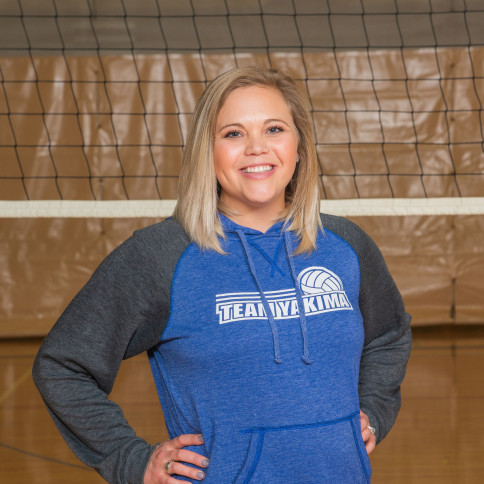 Lynnea started playing volleyball with Team Yakima in the 4th grade and played through her senior year. She played for West Valley High School and received many recognitions included WIAA Player of the Week and she played for the All State Volleyball Team. Lynnea played for North Idaho College where the team made it to nationals. After 2 years of college volleyball she switched of to her other sport and threw javelin for WSU in last years of college. She coached with Puyallup Juniors for 2 years before moving back to Yakima. This is her second year of coaching with Team Yakima. 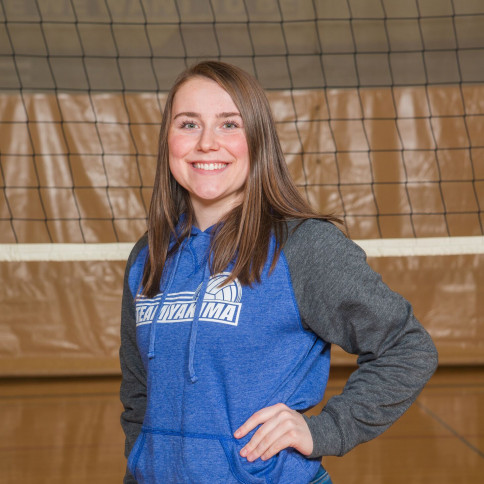 This is Mary's first year of coaching club volleyball. She started playing club volleyball in 6th grade and has been playing ever since. Mary played volleyball at West Valley High School and made it to the WIAA 4A State Tournament all 4 years. She helped her team win the 4A State Championship in 2018. In her senior season Mary was named the 2019 Big Nine CBBN 4A Co-Player of year and was a 2nd Team WIAA 4A All-State Team selection. In addition, she was named to the Senior All State Team which was chosen by the Washington State Coach's Association. Mary was also awarded the NECA Big 9 Fall Student Athlete for 2019. After finishing her high school volleyball season this year Mary decided it was time for a change of pace. Mary is excited to be coaching for Team Yakima and hopes to continue coaching when she finishes college. Mary is planning on attending WSU next year and pursuing a Bachelor of Arts degree in Education followed by a Master's degree in Special Education. 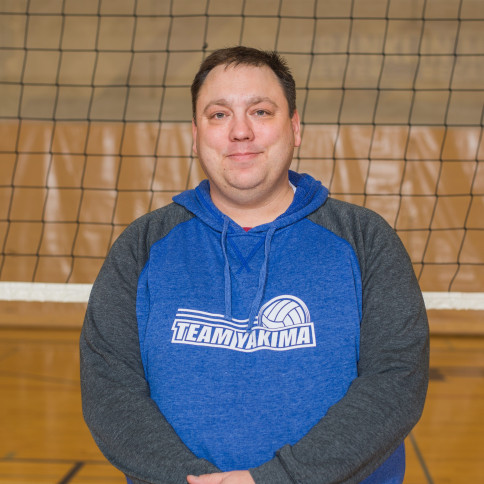 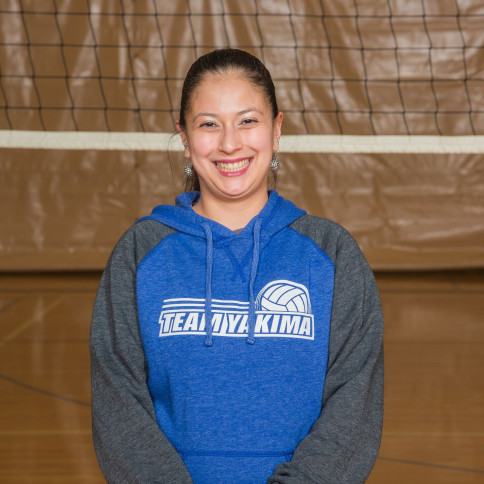 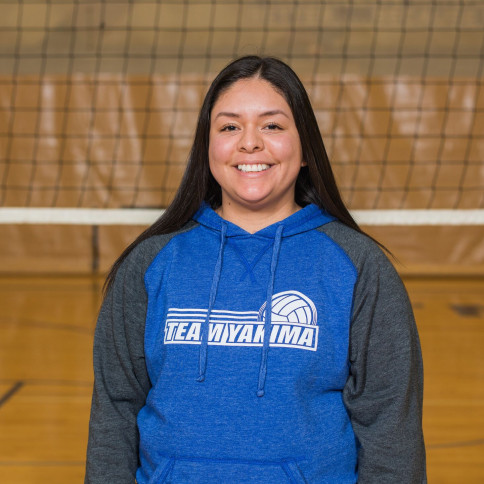 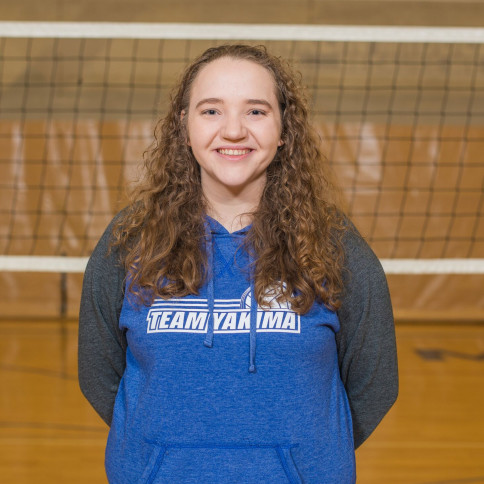 I began my coaching experience by helping host a volleyball clinic at my high school. Every year during my high school career I helped coach at Eisenhower's "Dig It Camp" (for volleyball players in grades 4-9th). I was also the assistant coach for U-14(2) at Club Lokahi during the 2017-2018 club volleyball season. I have a lot of experience playing volleyball as well. I started playing volleyball in 8th grade and have participated in middle school, high school, and club ball every year until I aged out/graduated. I predominantly played middle hitter/blocker. However, I have also played right side and outside. I enjoy helping players advance in their skills and enjoyment of volleyball.

This is Danielle's first year as a Team Yakima Volleyball coach, she is a senior in high school and was a high school four- year varsity player at Naches Valley High School. Danielle played club volleyball for seven years, playing on a national level team six of those years. She will be attending WSU in the fall of 2019. 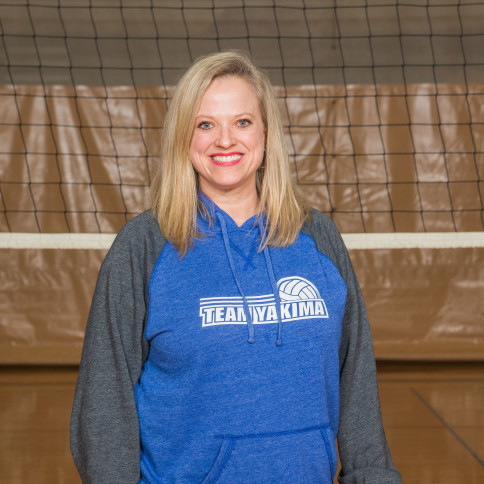 Kari grew up playing volleyball with her sisters. In her volleyball career she played club, was a 4-year starting varsity player in high school and went on to play at Chapman University. Kari began coaching over 20 years. Moving from the Seattle area, she now calls the Yakima Valley her home, where she's raising her son & daughter. In the first season with Team Yakima, Kari coached U14 Gold Elite. She led her team to win more championships t-shirts than they knew what to do with! They finished 3rd in the region. In post season play, at the Summer Soiree in Anaheim, CA, the team battled into the championship bracket & finished in 5th place out of 118 teams from all over the world. Now, in her 3rd year with Team Yakima she's coaching U12 Gold Elite. Kari is an animated coach & loves establishing a solid foundation of skill, communication, effort and the concept of playing with your heart. 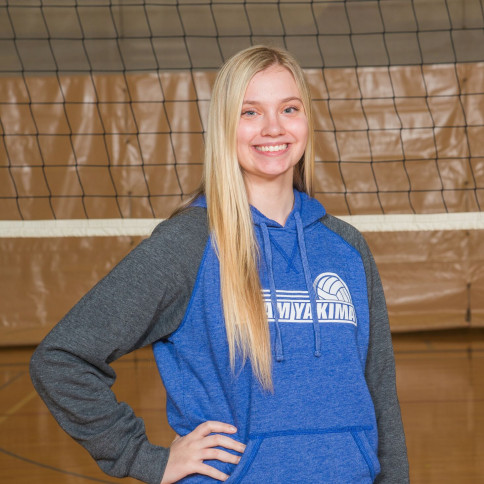 I am Katia Thompson, mostly known as Kat. I am assistant coaching the U12 Gold team. This is my first year of coaching volleyball. I attended West Valley High School, where I played all 4 years and won the 4A State Championship. I am now on a scholarship to be playing at Yakima Valley College. Team Yakima is what inspired me to pursue my volleyball career, and I could never be more thankful for this program. My goal is to be able to teach my athletes the ways of volleyball and to be the best that they could be, while having fun!

Maddie is a second year Team Yakima Coach. Maddie began her volleyball career in the 7th grade where she fell in love with the sport and continued to play for East Valley High School here in Yakima. During her high school career, she played Varsity from her sophomore year on, making two State appearances and placing 7th in State 2012. Maddie also played club for Team Yakima for 3 years at the U16 & U18 Gold level. She also played for Central Washington Elite for two additional years. After graduating high school, Maddie attended Oregon State University where she kept her volleyball life active, playing for a college level co-ed team. After graduating from Oregon State University in 2017, Maddie began her coaching career at LaSalle High School here in Yakima. Maddie has been the Assistant/JV coach for two years now at La Salle and is looking forward to furthering her coaching career.

This is Lilly's second year coaching Team Yakima, she is a senior at La Salle High School and a four-year varsity player. Before coaching, Lilly played volleyball for four years, including at the National level. She also enjoys playing and coaching golf. 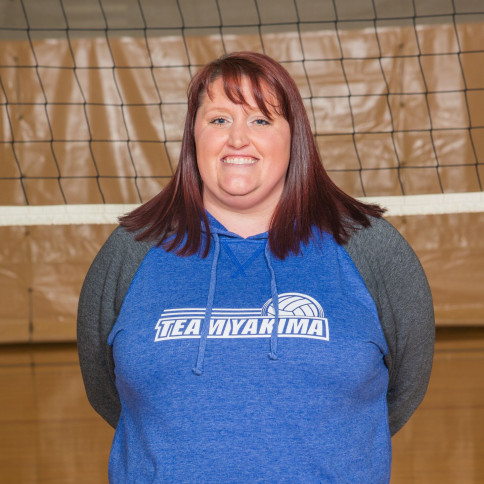 This is my 5th year coaching for Team Yakima. I played for Team Yakima and Riverside Christian School. I have also reffed high school volleyball for 5 years. 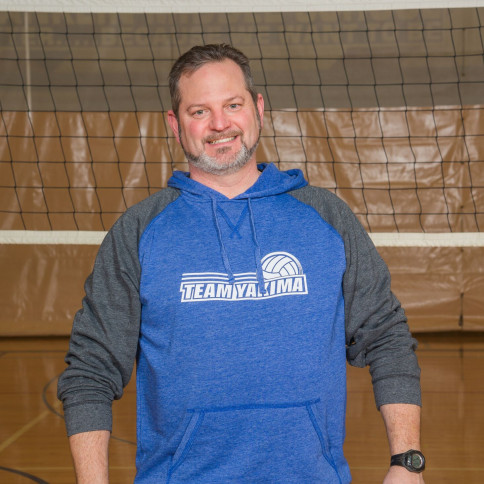 Steve has been involved with all aspects of volleyball for many years having three daughters' ages 26, 16, and 9. Steve has been a High School, College and USA Volleyball Official for the past 13 years with the Yakima and Tri Cities Associations. He has had multiple opportunities to officiate at the WIAA State 1A & 4A Championships and was selected to officiate in Championship matches. Steve is also a Regional Referee with ERVA (Evergreen Region Volleyball Association) and trains Clubs at Scorekeeping and Officiating Clinics. Steve has been a part of USA Volleyball since 2007 and has coached in the past for numerous clubs and age groups throughout the valley. Steve enjoys teaching our developmental players the fundamentals of the game and how to be a Team and work together to meet and succeed their goals. This is Steve's fourth year coaching with Team Yakima. 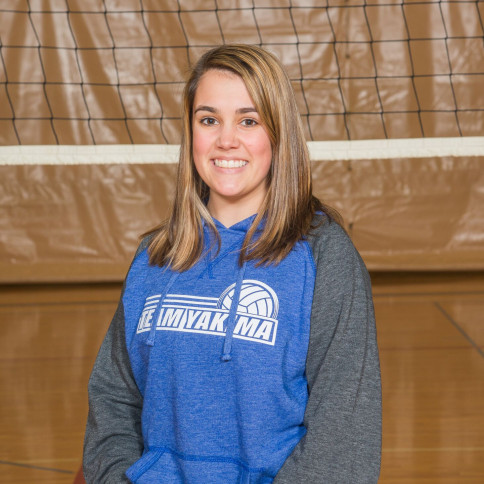 This is my first-year coaching for Team Yakima Club Volleyball. I have been playing volleyball for 9 years and counting. I am currently a collegiate volleyball player at Yakima Valley College, and am hoping to continue coaching and playing for more years to come. For me volleyball is more than just a sport it's a life teacher, and I am so glad to be able to share my knowledge and passion for volleyball through coaching at Team Yakima.

The world's most okayest volleyball coach. From day one, Sarah has had volleyball in her veins. Her father grew up playing volleyball on Manhattan Beach in California. Growing up in Selah, Sarah played two years with Team Yakima and 1 year with coach Al Rodgers at Cascade. At Selah High School, she played three years on varsity. During her time as a Viking, Sarah was chosen as the Female Athlete of the Year. She led her team to Selah's first state championship and they only undefeated volleyball team in the school's history. Sarah went on to start at Central Washington University for four years, where she still holds records. Sarah has been "Mom Coaching for years".